Nino E. Green releases ‘Justice on the Side’ 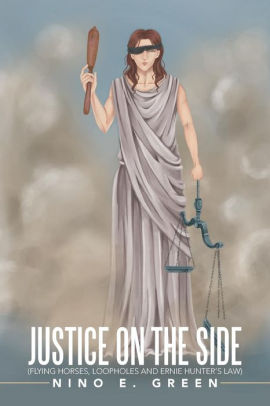 Escanaba, Michigan – Fifty years of experience as a lawyer has prompted Nino E. Green to write “Justice on the Side: Flying horses, Loopholes and Ernie Hunter’s Law,” a novel that explores the ways in which lawyers, their clients, judges and juries approach the law, each with a different view of justice.

This book takes Ernest Hunter, known to his colleagues in the legal profession as Ernie the Attorney, form the streets of Detroit to the backroads of Michigan’s Upper Peninsula. Faced with a series of challenges that will test his courage, creativity and luck, he discovers that the law is as fickle and imperfect as those who enforce its mandates. When judges and juries impose their own brand of justice, the law’s predictability becomes an illusion.

Ernie is forced to think on his feet as he attempts the seemingly impossible, searching for imaginary loopholes and trying to teach proverbial horses to fly. Justice, like beauty, is in the eye of the beholder; and Ernie sees justice through the eyes of his clients. Whether justice has been done will depend on which side you were on.

Ernie begins his career as a lawyer defending an arsonist and a sexual predator, both of whom he knows to be guilty.

“How can you defend someone who you know is guilty?” some would ask.

“How can I not?” Ernie would answer.

Available at Amazon and Barnes & Noble
To read a sample of this book follow this link.

Justice on the Side Reviews

“Justice on the Side”, Nino Green’s long-awaited book, is a wonderfully written account of his character’s adventures as a defense attorney. Nino mixes sophisticated humor with his scrupulous respect for the law and human rights in a collection of “fictional” incidents from downtown Detroit to Michigan’s Upper Peninsula. The settings, mood and music of the times, as well as legal procedure, are genuine.  – Joan Rust, Raid River, MI author Anniecat Chronicles